When Right is Wrong, then Left is what's Left.

by Wendy Davies (a lifetime member who joined in the last millenium) — September 6, 2018
Photos by Joseph Camilleri — Full Photo Album 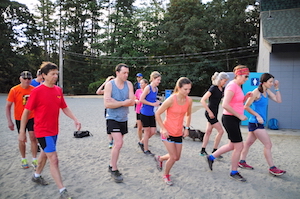 Bob explained the simple rules of the game to the simple runners assembled at the main beach.  Some had their race faces on, others were there to celebrate Labour Day with a fun run, while others were just happy to get out of the house.

We all started together, with the 5K runners turning off at Trillium and the 10K runners taking the long way around.  I was following Lara and Doug, but started lagging further and further behind.  However, my "strategy" paid off because as I reached the first blue flag, Lara and Doug were returning from their erroneous left turn.  I turned right with them.  Righty-O, let's go!  Only 59 more decisions to make.  I soon began lagging behind again, only this time wasn't rewarded with the pay off.  Obviously my "scouts" were making too many correct decisions and I was too far behind to reap the benefits.  So I ran solo for a while, randomly turning left or right at the blue flags.

By the time I reached Seaborn my 50/50 chances seemed to be working in my favour, but it was then that my luck ran out.  I missed a yellow flag, got off course, and for several long, lonely minutes had no idea where I was.  Fortunately I came across a tall, elderly hiker and asked him if he had seen any red, yellow or blue flagging, or any runners in the area.  "No flagging here," he said, "But I saw runners on the upper trail," and he pointed upward.  Of course, when in doubt, go up. "Are you a Harrier?" he asked.  "Yes," I admitted.  He walked me up the trail and I was impressed how his long strides matched my running gait on the rocky terrain.  He would make a great Harrier I thought, but there was no time for recruitment, just a quick "Thank you" when I saw my fellow Harriers.  Sara and Eugene were in the group, and it was Sara who found the yellow flag that I previously missed.  The Hare n' Hounds run was back on track.

Re-energized, I scooted ahead, came to a blue flag and turned right.  A yellow flag was up ahead so I yelled back "Yellow!" to the group.  Then another blue flag, another turn, another yellow.  "Yellow!" I yelled back again.  "Great," said Eugene, "Keep following Wendy everyone."  I wondered if I was being played like a fish.  Well, to be honest, that's what I was doing with Lara and Doug until they got away.  One red flag and I'll get reeled in.  I decided to make a break for it and hoped that I wouldn't get lost again.

Eventually I came to the main trail and saw a blue flag at the junction.  Ha!  This is too easy!  I figured all I had to do was to run up the Three Buggers and look for the finish.  Wait!  What??  Red flag!  Run back, take a left up Trillium.  Wait!  What??  Red flag!  Run back towards the junction.  Saw another red flag with a white tag that said "10K".  10K, OK, but which way?  Ahhh, run up the Fire Road.  Yellow flag - YAY!!

But it was nowhere near over.  The flagging led to a trail that bypassed the red flag that had previously sent me back to the junction.  The Three Buggers were back on the agenda, and unknown to us panting hounds, Crazy Legs was gleefully snapping pics of us from his concealed vantage point high on the hill overlooking the lake.

OK, the finish line must be coming up soon, but where?  Before the main beach, the flagging took me on a side trail which was strewn with handfuls of puffed wheat.  Wheat!  What??  I must be really close now.  I ran puffing over the puffed wheat, eagerly looking for more, and listening for muffled giggles that may reveal the elusive finish line.  I saw Elaine and Andrew walking toward me.  Elaine was holding a bundle of blue, red and yellow flagging.  "Are we done?  Is this the finish?"  "No," they said, "we're looking for the finish too."  I saw Sheila running back and forth, ready to give up.  Somehow the trail had gone stale.  No flagging, no puffed wheat, no clue.  Unknown to us at the time, other Harriers had already given up and gone to the Six Mile. 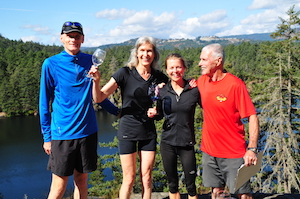 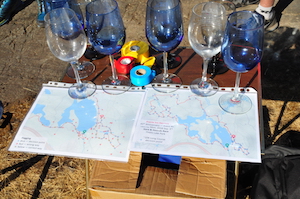 "C'mon, the finish line has to be around here somewhere."  Sheila took up the challenge, and when I yelled "Blue flag!" we forged ahead through the forest with renewed enthusiasm.  Sometimes we would split up at the blue flag and then call yellow or red, other times we would take the same turn, so if the leader called red, we'd turn back and the follower became the new leader.  Thus, when we turned to go up the last hill and finally came to the finish, Sheila had the yellow flag in her favour and took the Top Old Bitch wine grass trophy.  Bob insisted on handing me a wine glass trophy too, which I initially declined thinking it was a pity prize.  But then, on second thought, a 'Runner Up" trophy was good forethought on Bob's part since there would be a likelihood that runners would be pairing up.  Besides, I was probably the Top Oldest Bitch in the pack.  With that, Sheila and I clinked glasses and toasted yet another fine running of the Hare n' Hounds Adventure Run.

The Harriers Hare 'n Hounds Crumb (Puffed Wheat) Run was the sixth and final celebration of the club's 40th Anniversary.  Other events included our Awards Ceremony in March, an Easter Egg Hunt in April, a Pilgrimage Run in June, a Family Fun Day in July and a Summer Picnic/Club Reunion Party in August.

Thanks to all the club members who participated in the 2018 edition of Harriers Hare 'n Hounds race, from those who've only been members a few months to those who joined almost at the beginning 40 years ago.

The weather on the day was awesome, sunny but cooler than the high heats of the previous weeks and no smoke!

By all accounts everyone enjoyed the course, or at least what they ran of it.  Unfortunately after the first few participants went by some !#!@^ removed a 200m section of flagging near Bladderwort pond about 800m from the finish.  This confused some later hounds who ran in circles before giving up and gathering on the beach, while a few determined others eventually sniffed out a later part of the course and made it to the finish.

It was fun designing the course, trying to be devious so even those familiar with the trails and knowing my penchant for smaller trails and hills would sometimes choose wrong.  The course needed to be interesting, somewhat challenging, yet suitable to a range of runners.  While the start would be at the main beach, the finish would be a mystery location somewhere within walking distance.  This year it would be north east of the beach at the first open rock plateau on the saddle climb as it has a beautiful view of the lake and people could watch the runners pass by below as they headed into the final section.

The first challenge for the runners would be picking which of the approximate 8 ways off the beach was correct.  Would it be direct to the 3 buggers up the east side of the lake or up the dropoff towards Bladderwort or the old entrance road, or one of the ways to the west?  That would separate runners quickly and with lots of nearby junctions it could be a bit before they even figured out if they were doing a clockwise or anti-clockwise loop. ... [60+ choice junctions ...  course maps ... strava traces] ...  It was also decided to add a short course so that walkers and slower runners could participate.

The senior hare was already giving instructions and feeling kind nixed the first challenge informing all runners to head out via the trail to the little beach and the junction between the lakes, where the long course would continue left south of Upper Thetis on the Lakeshore trail and the short course would go right between the lakes up Trillium.  The race started about 9:12.  JonneeBoi dashed in just after having missed the instructions and rushed to catch up.

The senior hare and photographer gathered supplies from the parking lot and carried them to the finish, while the junior hare went off to flag the final 20%, completing it just before the first dog.  After the first bitches finished and *ed about some confusing extraneous flagging in the final section, the junior hare went back to locate and remove three snippets of orange and pink flagging from some previous event left up in the trees off the side of the course about 300 .. 400m back.  If only checking had continued another 500m.  After returning and observing many hounds pass below, the finish crew anxiously waited and waited.  Eventually two intrepid hounds wandered in, reported confusion and that some had given up and gone to the beach.  The junior hare headed out again, this time directly to the beach, encountering the festooned short course sweeps on the way.  Hearing of their and others "wanderous" plight he pointed them at the finish and carried on to the beach, where a pack of lost hounds were whimpering around or soothing in the water.  None recalled seeing JonneeBoi in a while, so there was some concern.

The junior hare went back to the point below the finish where many were last observed, and hopped along the last section checking that blue, red, and yellow flagging were still correctly in place.  About 300m along just before Bladderwort pond all was still good and a haggard JB was thankfully spotted by a blue flag.  After confirming the red was still there along the wrong-way side path and continuing along to the next choice junction just 20m away the first missing flagging was noted.  There should have been a blue on a small tree mid-path.  Relating this and pointing roughly toward the finish, and explaining a desire to finish checking the course, the hare set off expecting JB to follow.  A missing red flag were soon noted on the wrong major trail, as was JB's disappearance.  Oh oh.  Backtracking to the correct smaller trail the next blue and reds were missing, but the yellow across the dam was there as was the blue and red beyond.  However the next yellow, next two blue/red/yellow and another blue were missing.  Basically a 200m stretch along a major trail, some of which our course jogged around.  The two reds here were extant, as was the yellow and all remaining flagging to the finish.

Just before the last choice, the junior hare encountered the finish crew and the Long Lost Dog JB heading down.  Many made their way to the nearby Six Mile for sustenance, libations, regaling and the awarding of that final trophy.

Runner of the Week

Harriers Runner of the Week

This email address is being protected from spambots. You need JavaScript enabled to view it.